I have never felt so dirty and disgusted in my entire life. A thick layer of smog and filth covers my skin. My feet are black. My finger nails are blacker. It is definitely one of those all-I-want-is-a-shower-and-bed moments. But my disgust is far deeper than these physical qualities. In the last 24-hours I feel as if I have been lied to and deceived by more people than in 27-years of life.

My tendency to see the best in people is getting the better of me.  I was warned by my sister, and even in Melbourne when an Indian taxi driver acted like my friend then ripped me off $40. I tried to prepare myself but it seems my mind is so cultivated to look for positives that it is harder than I thought. I knew in coming to India alone I was throwing myself in the deep-end. I guess I didn’t realise quite how deep, and that it would be full of rips and currents trying to pull me under. Or maybe I’m just not as strong a swimmer as I thought. My temporal conclusion: India and I, DO NOT MIX.

I’m in AC-3tier which means three beds stacked on top of each other in lines creating a dorm room inside an air-conditioned carriage. Seeing as I was traveling 5-10pm I thought a lower bed a good idea- easier access to try foods and observe what comes past. No. The lower beds turn into a chair and shared by all meaning you can’t lie down and there is no way to escape. Always always always choose the top bunk – then you have a choice. I am surrounded by children and babies who are probably quite cute from a less exhausted-westerner-fed-up-with-India perspective. Don’t children count as people needing a ticket? Why didn’t I choose a top bunk? It’s okay. It’s only five hours. I can ignore the wrenching smell of breast milk for five hours. I should be more grateful – a moment ago I thought I was going to be thrown off the train for not printing out my ticket…

“What seat are you?” asked a neighboring passenger.

My first time on these trains and Mohan (my friend’s driver) had met me in Agra and looked up my seat number on his phone. At this time I didn’t know if I could trust him – considering the disasters experienced with his friend’s car in Delhi. And when it came to this ticket, I had no written proof of anything. Thank God it was just an honest mistake – as it turned out I am seat number 45 and a 50 rupee ($1.50) fine was all I got for not printing out my ticket. I am grateful not to be spending the night laying next to the almost-naked moaning dude laying on the train station floor.

I don’t know how much more of this I can bare.

Especially the children who look at you with big eyes and an open hand. One at the station pointed to her mouth so I bought a deep fried samosa for her. It cost the same price that two poached eggs cost me this morning (20 rupees – 60 cents), which would have been better for her.  I suppose deep fried crap is better than nothing, although nothing you give in this country ever seems to be enough. Everyone wants more. Even a generous payment for a tuktuk is looked at by the driver as an insult – even when you tip over and above the agreed amount that you already know is a ripoff. “More? Please madam, I want some more…”

I can’t blame them – if I were in their shoes I’d probably be doing the same. They have been brought into this mindset that sees rich foreigners as there to be sucked try, as much as one can.

I must warn you, these thoughts are coming after a long day that began with a 230am wake-up call in Delhi.

It was another day of highs and lows – the highs which included the Taj Mahal and the coldest and greatest banana lassi I’ve ever tasted (I downed three), and with lows mainly revolving around the uneasy feeling I get simply from being eyed down and ripped off by every single person that sets eyes on me.

“Did you notice every guy is looking at you?” a friend noted. “They’re not just looking at you, they are seriously fucking you with their eyes.”

I can ignore the eyes to some extent, especially when I’m with other backpackers, but as I discovered today it’s in the moments I find myself alone that I become easy prey. My life’s not in danger – just my wallet… and my respect for other members of the human race. If I ever come back to India it will be with a big strong man, or at the very least a confident street-smart friend, to travel with. But to be honest, I’m doubtful I’ll return. At least not any time soon.

The drive to Agra was another shut-your-eyes-and-pray-your-driver-doesn’t-crash moment – surrounded by honking large trucks – all with drivers you can be sure have not taken their proper 2 hourly break. Then my driver presented me with a tour guide I had not requested.

“You can tip him if you like,” my driver dismissed. Say goodbye to another 500 rupees. At least he was a good guide, sharing lots of facts and figures I’ve now forgotten, and not-half-bad photographer either – directing me to stand here and there, in between the bursts when people would throw babies in my arms for more photos-with-the-foreigner. 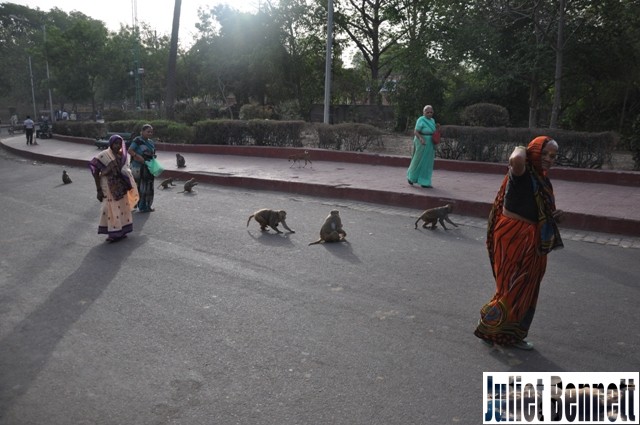 Walking to the taj

My favourite of a just a few takes…

My guide and me with Jaap, my new Dutch friend.

Me the celebrity. Lol!

I had to laugh when my fans thanked Jaap instead of thanking me. If you are travelling with a boy you must be married to him – at least that’s what this culture seems to presume.

I wasn’t at the taj for sunrise as I had planned, but when the 50 degree heat hit at about 10am I was glad my site-seeing had long been done and dusted. Now I was free to spend the rest of the day hanging about in a little cafe with other backpackers. That is, after getting all my bags form the car where (alone for ten minutes) I got ripped off by one of those stupid shop scams.

“It’s important you see this,” said my tour guide, “they show you exactly how the stones were carved into the Taj Mahal.”

First I was induced into a state of pity – shown the skinny workers making handicrafts and the deformed fingers that were resulting from the work. Then I was taken into a showroom. I was strong in the first showroom, but not so strong in the second one. Damn it! Just a couple of items that I’m sure I paid triple-price for. These sales people know their stuff.

View from Jaap’s hostel where (thankfully) I could leave my bags for the day.

It doesn’t look like much but this banana lassi was the bomb!!!

Just like with the beggars I give money to, and the tuk tuk drivers I over-pay, these little rip-offs put me in a funny head-space. The price I’m paying is cheap for the number of hours these people put into it, but the prices (about 1000 rupees, or $25, per piece) is still a lot of money to which almost none of it will make it into the hands of these weathered artist-slaves. And then there’s the compulsory bargaining process, which I’m too lazy to really be good at. I mean, I really can’t be bothered arguing over a dollar, but each time I don’t I know the dollars in my not-so-big budget, do add up. Oh man, what a head-fuck. I tell you what, if there is one thing I will take away from this place it’s a renewed appreciation for all I have: for my country, my people, and life in my western world.

Anyway I made it through the day, and soon I will arrive in Jaipur where (hopefully) my hostel will pick me up and I’ll finally get that much-needed shower and sleep.

India is another world. I am an alien on another planet. E.T. want go home…

New life: reflections on being a new mum

Every year I seem to have less and less time for blogging. This year has the record for the least number of entries, but for a very good reason: motherhood! Oh. My. Gosh. What a new appreciation I have for all the mothers of the world. Maternity leave is not a holiday by any stretch of the imagination. There is […]

Havana: Aesthetics of an old city in changing Communist Cuba

My partner and I recently spent a week in Cuba in June, mostly in the apocalyptic-like old city of Havana. My research supervisor asked if we speak at a “soiree” at his house, and in preparation I gathered some of my thoughts here. While I reveled in the history and politics, my partner is an […]

Retreat from the city: Watts’ mountain cabins and old ferry-boats

My partner, a sculptural artist, and I, with my love of writing, have been thinking about ways we might create some sort of retreat from the city. As I read Alan Watts’ biographies I have been curiously uncovering his two most unusual abodes: a communal mountain retreat with Gary Snyder, Catharine A. MacKinnon, Elsa Gidlow and others […]